Just back from... Ypres 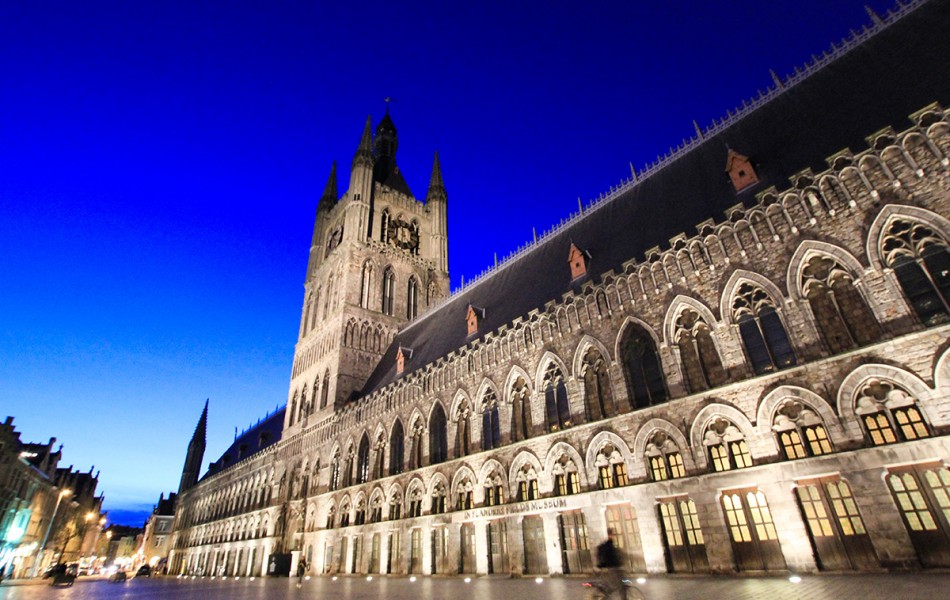 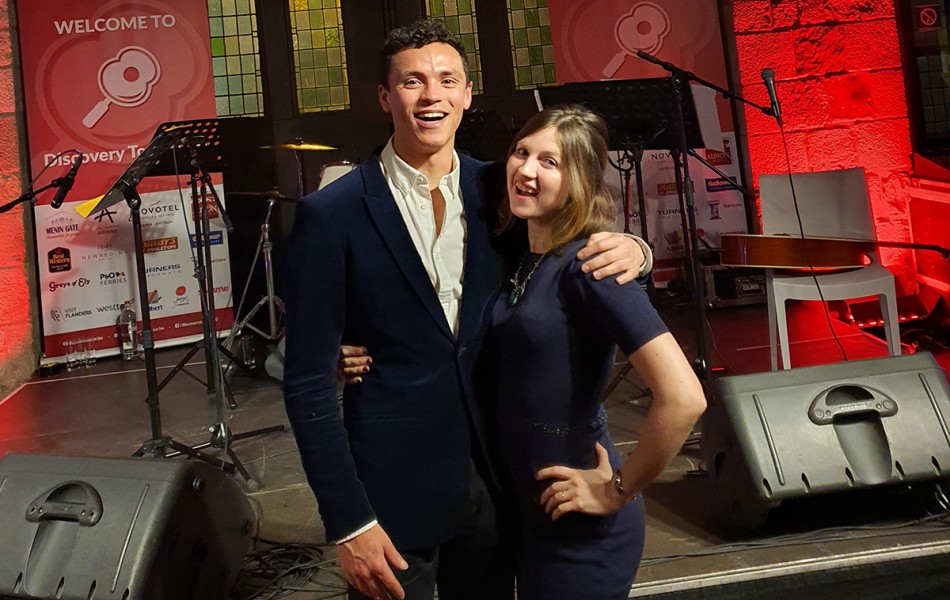 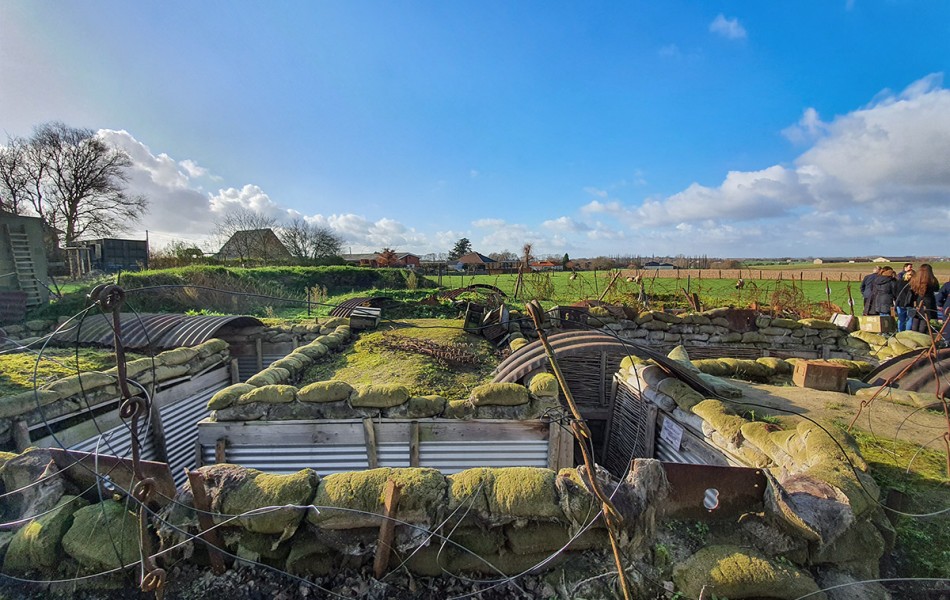 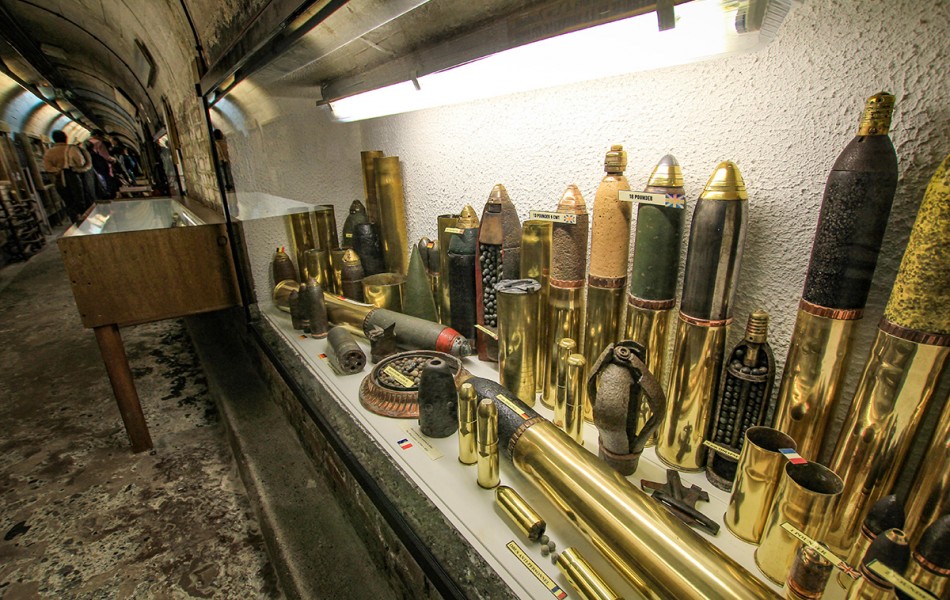 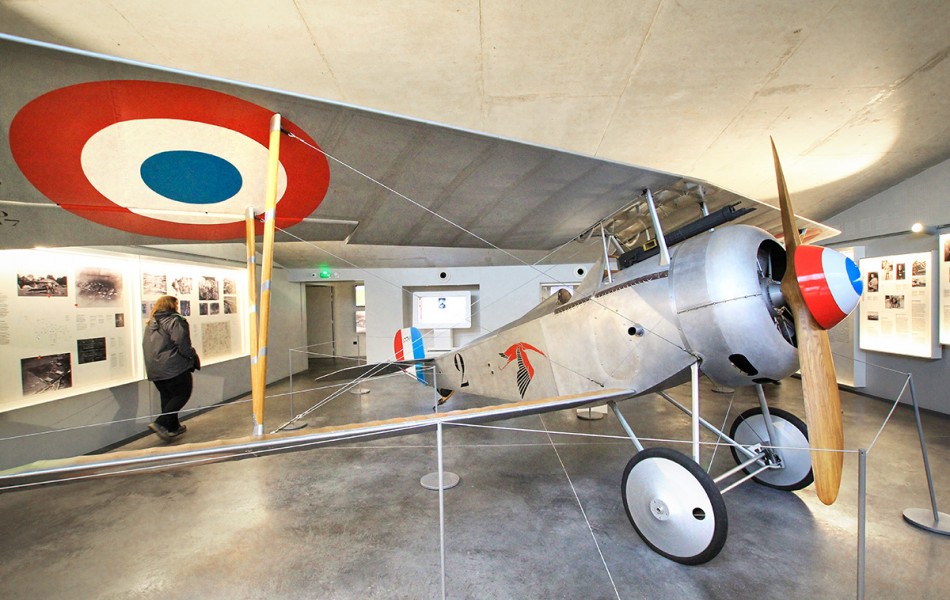 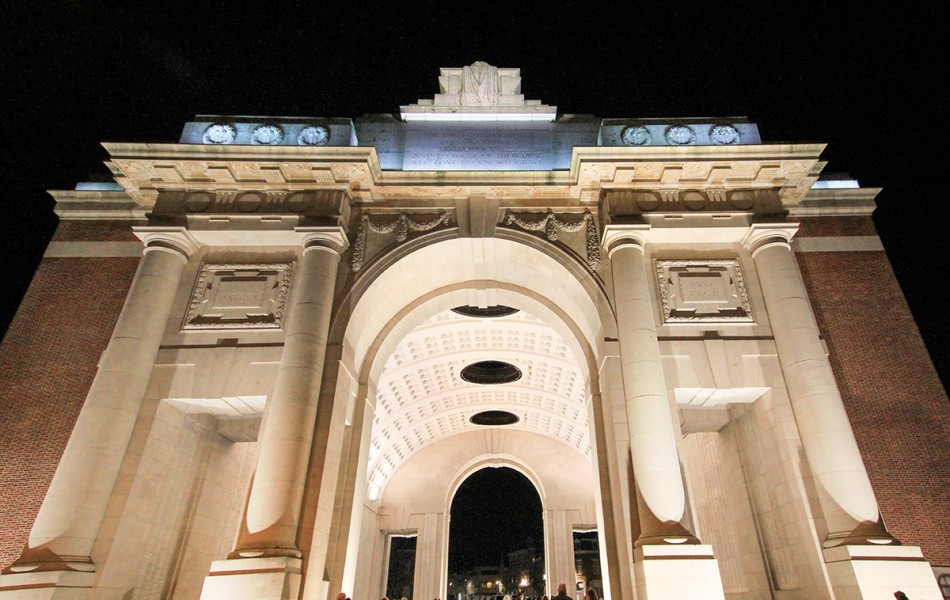 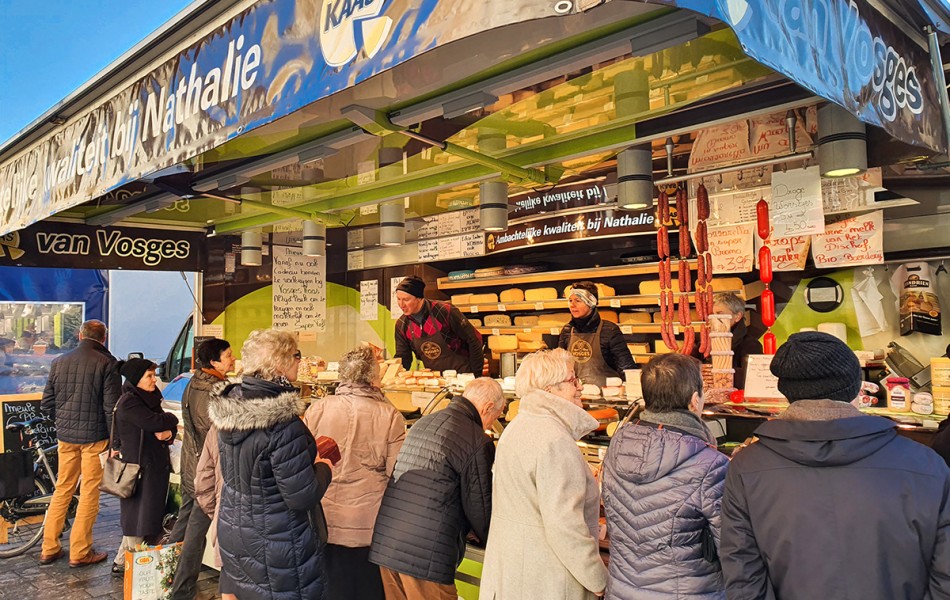 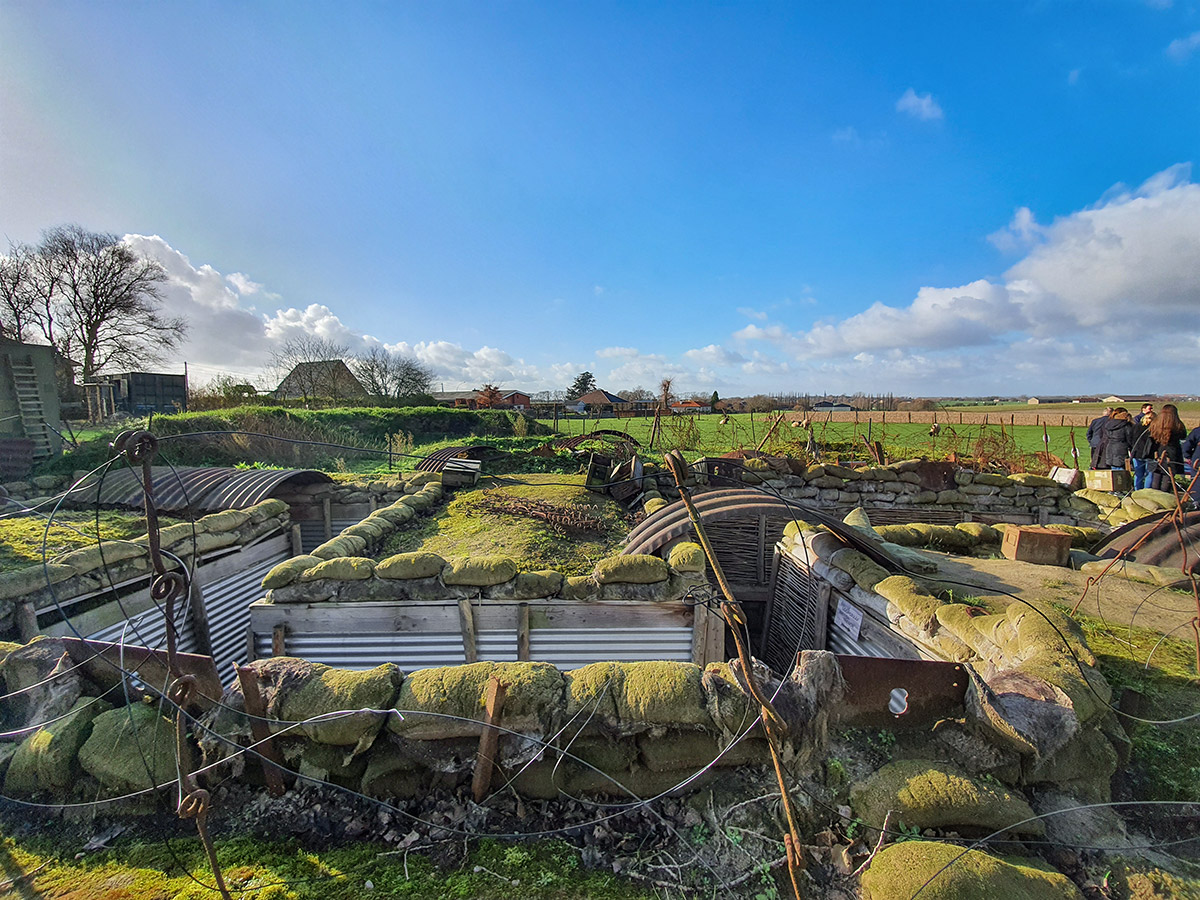 History teachers will need no introduction to Ypres. It's at the epicentre of the bloody battles of World War 1 and a must for anyone studying this period. There are heaps of sites and museums, with new ones opening all the time. Working out the best combination for your trip is a key challenge. But don't worry, we're here to help! We visit often to keep our knowledge right up to date. Two of our educational travel experts, George and Paula, have just got back. Here's their story.

We all met up late morning at Maidstone and hopped on the ferry mid-afternoon. The journey to Belgium was smooth and we passed through some lovely countryside on the way. Our hotel was perfectly located right on the main square. Once we'd checked in we went across the road to the Cloth Hall. This huge cathedral-like Gothic building is a feast of spiky towers and turrets. They used to trade textiles here in medieval times. Like many of the buildings around here, it was almost destroyed in the war. Much of it is a reconstruction. You'd be hard pushed to tell the difference though! It also houses two really good museums. The Ypres Museum gives a nice introduction to the town and its history whilst the In Flanders Fields Museum has been recently renovated and is packed with moving and interesting exhibits. The audiovisual bracelets recounting the personal stories of four people caught up in the war were particularly good.

More thought-provoking still is the sounding of the Last Post which takes place at the Menin Gate on the outskirts of the old town every day at 8pm. It was good to spend a moment in silent reflection and to think about the grim reality of what went on here over 100 years ago.

I was glad I woke up early today. It gave me a spare half an hour to go for a run. It was dark when I left the hotel and it had just stopped raining. I found my way to the stone ramparts which run right around the old town. The day slowly dawned crisp and clear. As I ran along the top of the ramparts I could take in the wide views across the old rooftops. The mist hanging over the moat on the other side was really quite magical. It was a great start to the day.

After breakfast, we hopped across to France to visit the Somme battlefields. First stop was the Thiepval Memorial monument. There are rows and rows of names of the fallen inscribed on this huge brick arch. Some 70,000 British and South African servicemen died here. None of their bodies were ever found. The sheer number of them is just hard to take in. They've recently added a great new museum too. For me, the huge panoramic mural which depicts that awful day of July 1st 1916 hour by hour was really moving. It feels almost peaceful at the beginning - the calm before the storm. By the end, it's bloody and brutal. It really brings home the awfulness of trench warfare. It's painted at life-size so you kind of get sucked into it as you walk along. There's also a full-sized WW1 warplane here and lots about the famous German fighter pilot ace the Red Baron.

Next, we visited the little town of Albert. There's a really good Poppies Hostel here and we did a quick site visit. It's split over a couple of floors so each school can have their own rooms. There's a staff common room and games room at one end so it's really easy to keep an eye on students.

It seems almost like there's a museum in every building in this part of France! We visited the Church of Notre Dame in Albert next. This too had to be rebuilt after the war. It has a huge storage cellar underneath which now houses the Somme 1916 Museum. It's full of clever reconstructions that make you feel exactly what it must have been like to cower here during an air raid or barrage of artillery. It's dark and a little claustrophobic and there's a soundtrack of people shouting and guns going off. I found it quite disorientating, really intense. Without realising it you find you've been walking through what is actually a really long tunnel - a quarter of a kilometre long. You come up back into the real world close to a peaceful park with a bandstand. The contrast is genuinely striking.

The other museum that you have to visit near here is the Great War Museum at Peronne. It provides a much broader view of the war and gives some really good context. There are displays of propaganda, uniforms, games and musical instruments that soldiers made out of bits and pieces to keep themselves sane. There's also some really good information about the impact of the war on the local civilian population too.

Perhaps the highlight of this busy day was the Lochnagar Crater. During the war, the Germans were dug in here in a well-defended location on top of a hill. The Allies secretly burrowed a huge tunnel under the hill and packed it with vast amounts of high explosive. When they set it off, it blew the whole thing a mile high. The resulting crater is 100 metres wide and 30 metres deep. It's actually quite hard for your mind to really take it all in.

We stayed in Ypres all three nights of the trip and the next day was Saturday - market day. I loved walking around the stalls here. There was literally everything imaginable on sale. Shiny cheeses, slithering fish, brightly coloured veg and fruit and cider and wine too. A top tip (which I learnt through experience!) is to have a few Euros in your wallet or bag. Lots of stalls here only take cash!

It was more of the war in the afternoon. At the Hooge crater museum just outside Ypres, there's a full-size reconstruction of the British and German trenches. You start on the German side and walk through it and then turn a couple of corners and enter the British side. Sometimes the two sides were really this close. It's really interesting to see how they were constructed in different ways and it brings home how claustrophobic life was down there.

Continuing a little further we came to Passchendaele, site of another huge and bloody series of battles. The museum here is housed in what used to be an old monastery. There are more dugouts and underground elements to explore. It's all very realistic - including the latrines! There's also all sorts of equipment to look at - artillery, bombs and even armour. Hard to believe, but some sentries were provided with armour that looks little different to the kind of thing knights of old wore. I got to try a suit on! It was ridiculously heavy and uncomfortable. I have no idea how people managed to run around in them. Getting down to get out of the line of fire must have been completely impossible.

We finished today with a couple more inspections visiting two more really nice Poppies properties back in Ypres. They are both really well located, just a five-minute walk from the Cloth Hall. One is housed in a building where British soldiers were lodged during the war. Again the accommodation was really flexible meaning you can cater for both big and small groups. The common areas looked really good too.

Sunday it was time to go home. We'd had an action-packed weekend but there was just time to fit in a Brewery Tour before we headed for the ferry. This probably isn't something you'd include on an educational trip! But we had a great time learning about brewing at the St Bernardus brewery in Watou. Of course, we had to sample one or two, it would have been rude not to!

There's nothing to compare with actually visiting the WW1 battlefields to bring this period to life. The quality of the museums is exceptional. You really do experience what the war was like for the brave soldiers on both sides and the poor civilians caught up in it. I'd highly recommend bringing your students here to find out for themselves.

Find out more about our History trips.

You've read all about our team's trip to Belgium, now find out what we can do for your students